Now that Wolfgang Puck’s mini chocolate figurines have been guzzled, it’s time to get real about the 83rd Annual Academy Awards. Sunday night was filled with ecstatic highs, weird lows, and some cross-dressing. But, all in all, I still enjoyed watching and I know that the 2011 Oscars will be one to remember.

As expected, the surprises were minimal. The King’s Speech ran away with Best Original Screenplay, Best Actor, Best Director, and the coveted Best Picture. These awards were justly deserved as all Oscars are. However, Director Tom Hooper might not have been the best choice over Darren Aronofsky’s Black Swan. The artistry found in Black Swan is true innovation that I deem Oscar worthy beyond Tom Hooper’s direction with the biopic The King’s Speech.

Colin Firth is naturally deserving of his rigid but vulnerable portrayal of King George VI. And Natalie Portman rightly won Best Actress for Black Swan over the last minute favorite Annette Bening in The Kids Are Alright. The no-brainer pick of Christian Bale and Melissa Leo for Supporting Actor and Actress was successful. Despite Melissa Leo’s candid use of the f-bomb on national television, the win was genuine and I couldn’t help but root for her.

The most controversy derived from the performance of hosts James Franco and Anne Hathaway. I feel the need to defend the pair and clarify what they did well and where they went wrong. First of all, didn’t we all know from the beginning that the producers of the Academy Awards this year clearly picked Hathaway and Franco in order to draw in a younger demographic? I think yes. Therefore, the two were bound to be awkward and unimpressive to fervent Oscar fans. The fact is neither of them are comedians which is why they clung to the teleprompter for dear life.

Many have attacked James Franco for his apparent boredom and Hathaway for her bubbly and almost annoying tendencies. Let me ask you something: have you ever been center stage in the Kodak Theater which seats 6,000 and stared into a camera which broadcasts to billions of people around the world? Now, granted, some of the hosts from the past (cough, cough… Billy Crystal) might have delivered the punch lines with a little more punch, but I was satisfied with seeing the stars try their best to entertain even if they succumbed to their nerves every now and then.

To be fair to those critics of James and Anne I will say that there were some speed bumps along the three-hour show. Despite the fact that Anne Hathaway’s singing voice is beautiful, I was not a big fan of her rendition of the Les Miserables epic ballad “On My Own” which was formatted to poke fun at 2008 Oscar host Hugh Jackman. Soon after the odd choice of song, James Franco felt the need to strut across the stage in a tacky dress and wig attempting a Marilyn Monroe impersonation. While I applaud his bold move and confidence in his masculinity, the joke fell quite flat.

Aside from some of the more awkward moments of the show, I found the finale uplifting as the students of P.S 22 in Long Island sang out the show with the classic “Somewhere Over the Rainbow.” This was a sweet touch to the Oscars and I loved seeing all the winners appear behind the children as they sang. Its cheesy moments like that which make good television, people!

When I watch the Oscars, I look forward to the stars, the teary acceptance speeches, and the memorable moments on and off stage, which this year’s Academy Awards were not short on. No matter what I say, some critics will always tear apart the Oscar show and recognize every production flaw. But then again that’s Hollywood, right? 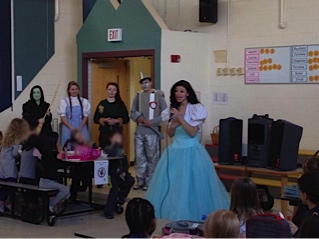