Mr. Robert Owen, the 2011 BHS Commencement Speaker, will be following in the footsteps of one of the most influential Americans. In 1954, Eleanor Roosevelt spoke to the 52 strong graduating class of Bethel High School. Having been the first lady under President Franklin Roosevelt, arguably one of the greatest presidents in US history, her coming to Bethel for such a small graduation was a big deal.

It all started with Bethel citizen Peter Ranis, class president, and his arbitrary letter to the first lady wondering if she would be interested. To his amazement she replied and after some back and forth 20th century texting (letters) she agreed. “I will gladly come to your graduation”, she replied, “Looking forward to seeing you.”

“It speaks of a different time.” Dr. Chesley, superintendant of Bethel Public Schools, discovered this important piece of Bethel history, while talking to Former First Selectman David Deakin, “A member of the class invited her, they corresponded by mail, she changed her mind when the person inviting her expressed disappointment.” It was a different time indeed.

“There wouldn’t be a lot of publicity or fanfare,” Mr. Ranis explained in an interview with Wildcat Word, “Bethel was a very strong Republican town.” However, politics were seemingly pushed aside. Packed into the tiny auditorium, several hundred people eagerly awaited Mrs. Roosevelt’s appearance. She spoke to the graduates about the major changes that come with graduation.

“Every experience, if used to the maximum, will be valuable in unexpected ways in other periods of your life”, she lectured. Stressing the importance of community, she aptly states, “We forget that in the early days, as a small nation surrounded with danger, and when no one could possibly know how the nation would grow, those who built this country pledged their sacred honor and lives for ideas of this nation. We do not fully know the meaning of the pledge, we should all know our nation and be able to go to a foreign country and speak about this great democracy. Wherever you go, people ask what happens in the Unites States, ‘what do they do here’ ‘what do they believe’?”

She definitely left a difficult mission for the graduating class. “If we lead as a democracy, we should know other lands. We all have the responsibility to see that our country is a real democracy. It is better to live for our country in peace than to die for it in war”, she continued.

She stayed and shook the hands of each graduating student, in an event that remains in the minds of all members of the class to this day. “Such was the character of our first lady”, describes Mr. Ranis, who is currently a professor of Political Science in York College, New York.

Three days later she wrote in her newspaper column, referring to the graduating class and students in general, “You must go on taking every opportunity to learn that comes your way. Then you will be sure to move forward and not find yourself in one of those dead-end jobs which becomes so routine and so dull that life is just a round of the same thing day after day. If you go on learning, whether your actual work remains the same or not, you will still find that you are developing as an individual and broadening your interests along many lines. That in itself will make life much more interesting.” 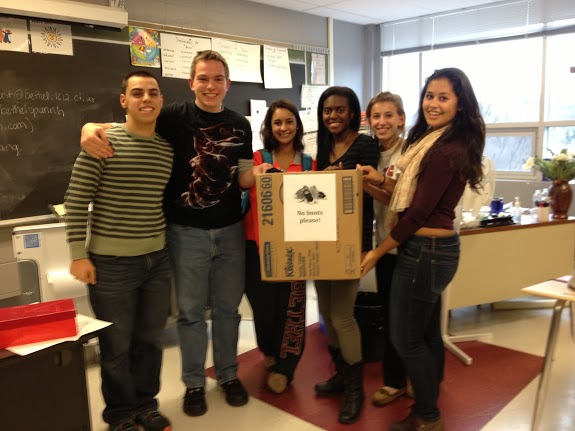 Brave the Shave Event at BHS