My entire life, I’ve been looking forward to the year 2012: the year I turn eighteen, graduate high school, and go to college. It is also the year I will vote in my first presidential election.

I was raised in a Republican household, and now that I am knowledgeable enough to form my own opinions, I happen to maintain the same political belief as my parents. When I made this decision, I did not align my ideas with that of the modern, stereotypical Republican. My idea of a “Republican” is not synonymous with homophobe, racist, ignorant, idiot, or any of the other insults the party is linked to. Why do people have such a negative opinion of Republicans? Unfortunately, I have to admit that this is in thanks to 2012’s Republican presidential candidates.

I must say I am disappointed; the first time I sit down at a cubicle to vote on Nov. 4th, the list of names on the scan tron do nothing for me. Actually, they’ve given me a pretty attractive eye twitch.

Remember the days when Texas’s Rick Perry biggest scandal was stuttering during a debate? About a month ago that all changed when he released a video campaign ad called “Strong”; in it he used his religion to express a homophobic message against gay soldiers, somehow thinking this will help him gain popularity. Needless to say, it received the highest disliked rating than any other Youtube video; it won out over the viral “Friday” music video by Rebecca Black.

The remaining candidates are not much better. Newt Gingrich, although with impressive government experience, portrays a poor moral character: he cheated on his first wife (while she was in cancer recovery), left his second wife because she had MS (Multiple sclerosis), and is now on to the third.

Mitt Romney, in 2006, was attacked by PETA for strapping his dog in a cage to the top of his car for a 12 hour drive. Rick Santorum is just another bigot. Tea Party member Ron Paul thinks cutting all spending for our military, in a time of global aggression, is a splendid idea.

The recent New Hampshire primary clarified any questions the Iowa caucus left America with. Romney maintains the lead with 39% of the voters’ love.  Paul jumped from third place in Iowa to second in NH, at 22.8%. Jon Huntsman (the most moderate of the group) had a surprising rise from the ashes: he scraped by with 0.6% in Iowa, but placed third with 16.8%. Gingrich maintained fourth place at 9.4%. Santorum fell from second place at 9.3%, and Perry dropped from 10% to 0.7%.

Our one saving grace is Michele Bachmann’s drop-out after claiming an embarrassing 5% of voters at the Iowa Caucus.

I feel that I belong to a different party than these buffoons. I intern at Danbury’s News Times; recently, they called up the first selectman, the Governor, and the Senator to ask who they think should win Republican presidential nominee. Curiously they each said Mitt Romney, as they feel he’s most likely to cooperate in a bi-partisan manner. My editor-in-chief and another staff writer then continued to joke that the candidates this year are “absolutely insane”; the only sane one, Jon Huntsman – a more moderate Republican – is currently the underdog. Oh, the irony.

So what will become of America after the fall of 2012? Bachmann has stepped out, with Perry sure to follow, with such an embarrassingly low percentage to sport. The remaining candidates are still in the eyes of many as functionally insane. By this, I mean their ideas could ruin our country, yet they actually have a chance of winning.

It seems that for Republicans this year, we’re forced to vote for what we find to be the most bearable hell. None of the current candidates make me feel inspired for my country, for my future, or for the resolution of America’s economy and health care. The year 2012 may have only started, but from this standpoint, the life for American political elephants seems grim. 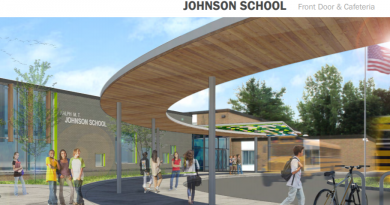 Who is that? Celebrity sighting at BHS!