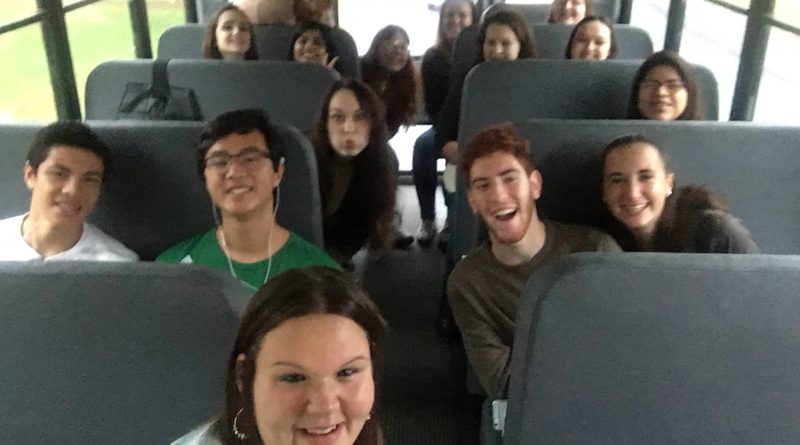 On Friday, Oct. 21, hundreds of aspiring journalists congregated at Southern Connecticut State University to attend its annual High School Journalism Conference. The event, which has gone on for 33 years, is meant to give high school journalism students a glimpse into college-level and real-world journalistic work.

“We have expanded over the years and now host over 450 high school students and their school teachers or advisers,” said SCSU Journalism Department Chair Cindy Simoneau. “We offer 18 professional development workshops and a keynote speech from a statewide journalist.”

This year’s keynote speaker was Jenn Bernstein of Fox 61 News, an Emmy-winning reporter and anchor of a weekly television broadcast “The Real Story.” Bernstein outlined her journalistic career from college to her position on Fox 61 News.

Bernstein highlighted the importance of networking and learning how to work the camera for yourself.

“People who don’t want to pick up the camera are in for a rude awakening,” said Bernstein. She reveals that she had to film her own segments for years while she worked in Albany, Buffalo, and Philadelphia.

Bernstein also stressed the importance of flexibility and preparedness as a broadcast journalist.

“Try to be quick on your feet, and honest with your viewers,” said Bernstein.

A brand-new part of the conference was a drone demonstration before the breakout sessions began. As drones become more widely-used, their role in photojournalism becomes more important. Drone usage has exponentially increased since the spring of 2016, when the Federal Aviation Administration finally issued its official drone guidelines.

“Drones are definitely something we’re working on,” said Bernstein. “They can be really helpful in getting a shot or getting some new information for the story.” She added that drones are far more cost-effective than using a helicopter for aerial footage.

Students learned about drones and more during the 18 different breakout sessions. One popular session, classic photojournalism, taught students about the more visual side of journalism.

“I really liked the classic photojournalism, just because the man who presented it had a whole slideshow of photos from history that were really hard-hitting for people,” said junior Julia Schettler, who attended the conference with her high school journalism class. “They went along with famous journalism stories so that was really cool.”

The workshop was taught by Prof. Vern Williams.

Among the other breakout sessions were workshops about social media use, broadcast journalism, and public relations. One session, entitled “Ethics? Why Does That Matter?” dealt with the importance of following the rules of ethics as a journalist.

“In the ethics workshop, I learned a lot more about writing and what it takes to be unbiased and just to write to your best ability,” said Catherine Quinn ’18, another attendee. “Professor Dunklee was very interesting and it really gave me a taste of what college classes are like.”

The High School Journalism Day is all about exposing students to journalism on a professional and college level.

“I believe the event is extremely important for student journalists to receive professional guidance and learn about updates in the practice of good journalism,” said Simoneau. “Networking with other schools is also important, as is exposure to a college journalism program.”

One young editor, Madison Schettler ’17, attended the program with the hopes of learning how to improve her school’s newspaper.

“I think that the biggest thing I took away was to make our stories original, and that being a high school newspaper shouldn’t stop us from acting like a ‘real’ newspaper,” said Schettler. Schettler added that she was glad she attended the conference, complementing Bernstein’s speech.

“I thought that it provided a lot of real, uncensored insight as to what the field of journalism is actually like. She talked about the struggle to find a high paying job, which I liked, because it showed that she is truly passionate about what she does and that she wanted all of us to pursue whatever it is we are passionate about, regardless of money.”

Inspiring passion is exactly what Bernstein and the SCSU Journalism Department set out to do, and hope to continue to do so every year at their Journalism Day.

“It’s a job you need to be passionate about,” said Bernstein in her closing remarks. “Find your passion and you’ll really enjoy it.”

A Bethel and French Connection

Track and Field Fund Raiser to be Held Saturday