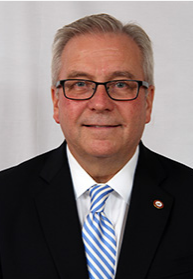 It can be easy to overlook local elections and be unattentive towards the political changes that take place on a smaller scale, as national politics usually steal the spotlight. On Election Day this past Nov. 7, Matthew Knickerbocker and Cynthia McCorkindale rallied their troops and battled for the position of First Selectman for Bethel. Matt Knickerbocker is a longtime Bethel resident and is constantly looking for ways to be more involved. He served on the Board of Education for ten years, including seven years as Chairman. Knickerbocker has been the town’s First Selectman since 2009 and still has plans for Bethel. Recently, Knickerbocker told the Bethel Democrats that he was “drawn to town government to fulfill a desire to contribute to the success of our schools and town.”

Both candidates had similar goals of overall improvement of Bethel. However, they differed on execution. For example, McCorkindale wanted to experiment with combining departments and training town employees to have a versatile set of skills. However, Knickerbocker argued that such a plan could not be fully executed, because certain departments already have employees that recently became full-time due to their workload.

Additionally, the candidates had a difference in opinion when it came to the finalizing of the elementary school improvement plan. McCorkindale revealed to the Danbury News Times that she was irritated by the lack of a letter to the public from Knickerbocker and Superintendent Christine Carver regarding the specifics of the project. However, state law prohibits an incumbent from sending out any letters to the town that would enhance or promote their candidacy in any way. Therefore, any letter about the project could have resulted in Knickerbocker getting fined by the state.

At BHS, there was not a much buzz about the elections until just days before. On Nov. 2, Aileen Zheng, a junior at BHS, posted a tweet in which she recalled an interaction between herself and McCorkindale on Facebook earlier this year over a disagreement about Bethel Abroad. Many students jumped to her defense and were disappointed in McCorkindale for her patronizing tone. Others found themselves frustrated with Mr. Knickerbocker’s long hold on the position of First Selectman and felt ready for change.

On Nov. 7, the people of Bethel were given the opportunity to vote for the next First Selectman. Democrat Matt Knickerbocker won about 3,000 votes, winning out over Cynthia McCorkindale. Mr. Knickerbocker will serve his fifth term for Bethel along with fellow Democrat Selectman Richard Straiton and Republican Selectman Paul Szatkowski.

Say Yes to the Prom Dress!