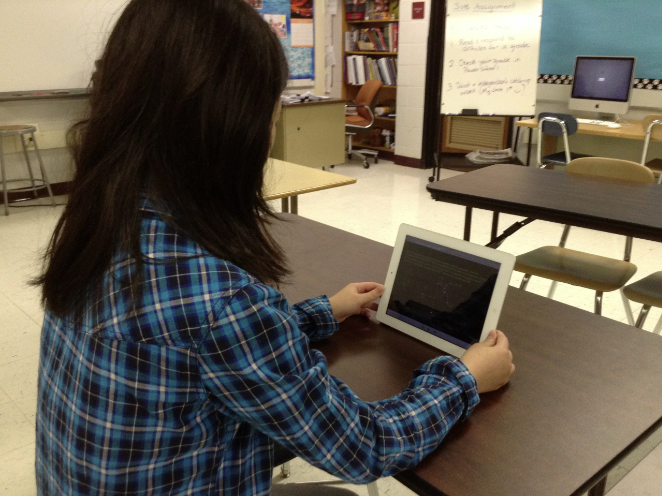 Returning to school this year, students were introduced to a slew of new technological projects BHS has been hard at work implementing over the summer; most notably becoming a “Google School” and developing Moodle II. Surely there has been general confusion surrounding these changes, but it symbolizes the radical step Bethel has taken to redefine how teachers teach and students learn.

With the increased presence of tablets, laptops, and smartphones on Bethel’s campus, the administration has taken the necessary steps to accomplishing what’s referred to as “flipping the classroom.” The philosophy behind this approach involves having the students learn the curriculum at home on their own time, and work on homework during class time. In my opinion, this is a long overdue measure. However, it’s bothersome living between a paper-centric learning environment and a paperless environment.

Students have already been exposed to this type of learning through popular resources like Khan Academy and YouTube lectures, but Bethel hasn’t reached anywhere to the extent of some schools.

There are some common misconceptions associated with “flipped classrooms” as people are quick to stereotype the system as a synonym for online videos and courses, or a lack of in-classroom instruction from the teacher. Instead, the flipped classroom converts hour long spiels into a chain of 10 minute web videos either dictated by the teacher through a screencast or from a third-party source such as YouTube. While in class, however, rather than sifting through hours of new material, the students would work in small groups or one-on-one with the teacher to solve homework and review content already learned, resulting in an increase of direct interaction between the student and the teacher.

While many teachers boast their success with the new education model, many argue its benefits in capturing their students attention. For many students who move at a slower pace, the implementation of technology becomes a gruesome distraction. Many find it challenging to self-engage with a lecture at home, and detest not having the ability to ask questions until the next day. Instead of providing a comprehensive and exciting learning environment, alternatively it replaces understanding with frustration. Plus, for students who typically don’t complete homework in the first place, they miss out on the lecture entirely. Eric Periera ’15, a student at Bethel High claims, “I would personally retain the info I watched at home, but I don’t know if my other friends could.” And it’s those friends who cannot, which ultimately begs the question, is this “flipped classroom” for everyone?

So now what? Personally, I believe we should take a radical approach to transforming our education much sooner rather than later. I’ve grown fond of the self-education philosophy and find that I get more curriculum out of independent research than I do in class. In fact, I’ve come to the point where I look forward to watching the self-teaching method, much more than the structured in-class lecture. I love the ability to pause, rewind, and re-watch a specific concept numerous times.

In my opinion, it’s time to completely re-imagine the typical school day. For honors students, or those who are highly motivated academic-wise, I propose a shortened school day in which students work on outside/independent projects to learn the curriculum (of course utilizing web-based lectures), while class time is devoted to solving homework problems, activities, and content facilitated class discussions. When recalling his experience in his sophomore year learning about the chemistry mole concept, Quinn Vissak ‘15 recalls, “Our teacher gave us two weeks to watch six videos, complete six online quizzes, and a test at the end of the unit. You could work at whatever pace you wanted as long as you finished by the deadline. I really enjoyed this method.” Here students could add a sense of flexibility to their schedules, work through the content at their own pace, and get one-on-one help from the teacher to solve the problems in-class. Essentially, the ideal “flipped classroom.”

However, not everyone can learn through a screen, and for these students, they would attend traditional learning classes, oriented to put a strong emphasis on technology in the classroom, but instead of watching the lectures at home the students would still engage in in-class instruction.

Look, obviously none of this is going to be implemented overnight, and probably not to this extent (yet), but the addition of smart devices piling into students lives seeks answers of how this will be executed into a twenty-first classroom. I’m not suggesting that school is irrelevant or that computers should replace teachers, but instead an alternative approach to our dated education model with something tailored to the individual, not the masses.