Surely, no one suspected that Starbucks would remove the pretty snowflakes and delicate looking Christmas trees from something as cherished as their annual holiday coffee cups, leaving us with a red shell of what it once was.

But instead of merely showing disapproval, people like Joshua Feuerstein have taken to actually boycotting Starbucks with claims that these cups display a hatred for Jesus and the Christian faith.

People can be as unhappy about Starbucks’ new cups as they want, but claiming this is an attack on Christianity is a petty and farfetched argument. The previous holiday Starbucks cups have never depicted any symbols holy to Christianity or any other religion.

Starbucks themselves even explained their decision to come out with plain red cups this year, claiming they “[took] a cue from customers who have been doodling designs on cups for years (Starbucks held a contest to support this creativity)…this year’s design is another way Starbucks is inviting customers to create their own stories with a red cup that mimics a blank canvas.”

The Starbucks cups might not be abundant with snowflakes and shiny Christmas ornaments, but the coffee chain has plenty of holiday-themed drinks, like the classic Peppermint Mocha latte, as well as the Christmas and Holiday Blends. And what’s even better is that these blends come packaged in red and blue, with designs ranging from Christmas trees, to dreidels.

And thus, this brings us to the supposed “War on Christmas.”

For many years, as stores of all kinds have begun to greet their customers with “Happy Holidays” rather than “Merry Christmas,” people have started complaining about what they refer to as a war on Christmas. These people resent the images of menorahs and dreidels beside those of Christmas trees, and claim they’re offended when they’re greeted with “Happy Holidays.” These same people are the ones who claim Starbucks hates Jesus.

Though Christianity remains the main religion in America, the populations of Jews, Muslims, Buddhists, and those who identify with no religion at all continue to grow. The Religious Landscape Study estimates that 70.6% of American citizens are Christian. This still leaves 29.4% of Americans that identify with another faith, or none at all. As a result, “Merry Christmas” and “Happy Holidays” have become sensitive phrases that can sometimes cause offense.

“Happy Holidays” isn’t supposed to be an attack on Christmas; it’s supposed to be more inclusive of all the religious holidays celebrated during the holiday season.

There’s a simple solution to all this. Tolerance. Respect. Understanding.

On the other hand, if you wish someone a “Merry Christmas” and they reply that they don’t celebrate Christmas, apologize and wish them a “Happy Holiday” instead. It’s the polite thing to do. It’s the mature thing to do.

There is no war on Christmas. Society has simply begun to be more inclusive and accepting to other religious faiths–and that is a good thing. No one is trying to stop anyone from celebrating the holiday, especially not Starbucks and their red cups. 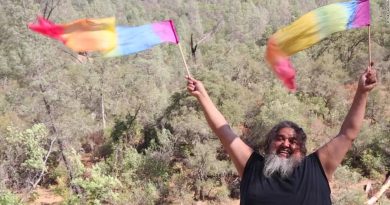 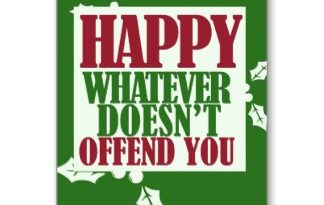