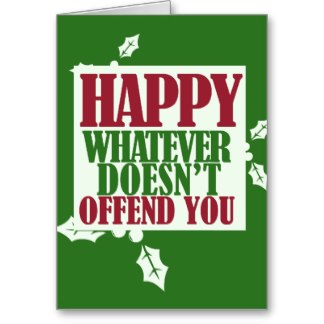 Since the first recorded observance of Christmas in the year 336 A.D., the holiday’s significance has diverged into two entirely different celebrations. The original celebration derives from the Christian observance of the birth of Jesus.  Throughout the years, however, Christmas has also become a holiday for even non-Christians to exchange gift and participate in non-religious traditions. As the holiday becomes more and more commercialized, some Christians are taking a stand against what they’ve declared to be the “War on Christmas.” In an effort to “keep the Christ in Christmas,” some have denounced the materialistic side of Christmas and insist on saying “Merry Christmas” instead of the broader “Happy Holidays.” Now, as corporations begin to take sides on the issue, the divide between the two sides of Christmas has never been so intense.

Today, most believe that the true meaning of Christmas has been left behind in lieu of an secular, commercialized frenzy. The depreciation of the biblical meaning of Christmas can be traced back to the year 1881 in which “The Lady’s Pictorial,” a women’s newspaper, describes Christmas’ arrival in the material world and not just the religious. By 1880, department stores were putting tremendous effort into outdoing their competitors. The monetization craze was slowed, however, in the late forties and early fifties following the second world war, but it didn’t end entirely; the advent of commercial television aided companies in further profiting from Christmas. In the 1970’s, most television commercials starting at the end of November were Christmas specialized. Today, it’s impossible to walk through a department store without seeing Christmas ads, as early as the days following Halloween. According to the American Research Group, in 1985, the average American spent about $289 on Christmas, and by 2001 the average american was spending up to $1,051 on Christmas alone. Perhaps it’s time that we, as Americans, take a step back to look at how our finatic consumer nature has had an effect on the religious roots of Christmas.
Today, more than 287 million people in the U.S. celebrate the annual holiday of Christmas, as an integrated part of the winter season for many Americans. However much of the country is divided on whether that many people have the right to celebrate Christmas. More than a quarter of people who celebrate Christmas in the U.S are not Christian, some even belong to other religions. Of the non-religious people in the U.S., roughy 81% celebrate Christmas in the modern day. Non-Christians now participate in the occasion, claiming that Christmas has taken on more meanings than just the birth of Jesus Christ.

Controversy has arisen between Christians and non-Christians on the interpretation of the event because many non-Christians believe that Christmas is about family time and gift-giving. Non-Christians state that Christmas has become unavoidable due to its presence on social media and its wide-spread commercialization in society. Christians, on the other hand, have taken offense to their holiday becoming more materialized than being a religious holiday and some have accused non-Christians as having diluted Christmas so that it feels unacceptable for them to participate in the holiday. This argument has been strengthened through the use of social media to spread holiday messages. Christmas and all of its events have been broadcasted online, rather than shared personally with family members and loved ones. Almost every app, including Snapchat, Twitter, Facebook, and Instagram, promotes the holiday for all users to see.

Social media’s influence on holiday celebrations is increasing every single year. In the past few years, social media networks promoted a myriad of holidays that are both popular and not-so-popular. Social Media networks such as Snapchat, Facebook, and Twitter promote holidays that aren’t as popular as Christmas, for example – Snapchat includes filters that promotes the celebration of holidays such as Ramadan,  and Rosh Hashanah and Twitter advertises various holidays on their news wall. Social media is trying to be more inclusive, so why can’t the American population?

Americans haven’t found much controversy in how various social media outlets promotes the holidays, but many have found fault in coffee cups.

The Starbucks Holiday Cup design has been a point of controversy for many years. When the company released plain red cups instead of designs typically connotated with Christmas starting last year, many customers report being angered at Starbucks’ stance on political correctness and their lack of Christmas promotion. The offense is coming mostly from the Christian population who want to promote their religion and practices, forgetting other holidays that take place at the same time. Their passionate views have spread so much that even political figures, like Donald Trump have gotten involved. In a rally earlier this year, president-elect Donald Trump responded to Starbucks’ politically correct stance by stating:

“That’s the end of that lease,” referring to the Starbucks in Trump Tower. He goes on to say, “If I become president, we’re all going to be saying ‘Merry Christmas’ again, that I can tell you.”

The latest conflict between Starbucks and their customers involved a growing trend for Trump supporters to order under the name of Trump. They view this as the “TrumpCup”, a defiance of the Starbucks’ company and what they view as a liberal agenda. This issue has been caused by the discussion of whether to say “Merry Christmas” or “Happy Holidays”, a debate on religious and political correctness.

However, it’s not just Starbucks that has been struggling with the controversy between saying “Happy Holidays” or “Merry Christmas.” Several well-known companies have come forward to make their stance on the issue clear. According to the American Family Association, businesses such as Walmart, Macy’s, Toys R Us, Bass Pro Shop, Lowe’s and JCPenney have all publicly stated that their employees are permitted and encouraged to use “Merry Christmas.” Others, such as Barnes and Noble, PetSmart, Family Dollar, Victoria’s Secret, Officemax, Bath and Body Works, Staples, and Footlocker exclusively use “Happy Holidays” in an attempt to appeal to all customers. SmartStyle salons, found exclusively in Walmart stores, have diverged from their host company and explicitly told their employees to refrain from any religious greetings, such as “Merry Christmas.” SmartStyle received immediate backlash and boycotts in response to their policy, with conservative and family organizations calling it an “attack on Christmas.”

With strong opinions affiliated to either side of the argument, there have been alterations to commonly used terms in the month of December, possibly due to a protection of Christian opinions in retaliation to “Happy Holidays,” or a step in the movement of companies and businesses who are switching to a more inclusive phrase. Maryland school districts recently changed the title of their “Christmas Break” to “Winter Break,” meanwhile, Texas lawmakers have signed a law protecting the phrases “Merry Christmas” and “Happy Hanukkah,” thus condemning “Happy Holidays.”

Let’s face it – there is always going to be something that offends us. The world is a melting pot – home to a plethora of different religions and opinions. Therefore, there is no better solution to offer than just to be considerate. Say Merry Christmas to Christians and Happy Holidays to everyone else. The point of the season is to spread kindness and cheer, so instead of complaining about the controversial coffee cup, how about buy a cup of coffee for someone – pay it forward – and remember that it’s better to be inclusive than exclusive.