Buzz surrounding the latest swap for new bats in competitive leagues and associations around the country has created quite a passionate debate in the baseball community.

Starting this season, high school baseball programs across the nation have adopted the new BBCOR (Bat-Ball Coefficient of Restitution) bats.  Prior to this year, the commonly used BESR  (Ball Exit Speed Ratio) standard bats had been a popular topic of concern in baseball circles.  The aluminum bats over the years were believed to have been unnecessarily advantageous to hitters and have proven to be the center of safety concerns as well.  They first made their debut last year when the NCAA required all participating college teams to use the bats.

For over a year now, high schools have been anticipating the transition to the BBCOR bats. However, many ball players and coaches alike are not informed or do not have any knowledge about the bats whatsoever.

While the previously used BESR bats measured the speed of the ball after it was hit, BBCOR measures the  “bounciness” of the ball off the bat or the “trampoline” effect.  When a hitter makes contact with a ball, the ball actually compresses and deforms close to a third of its size at high pitch velocities.

A given pitched ball from a pitcher holds a great deal of energy. That energy is visibly seen through both its speed and spin.  Often, when wood bats are used, much of that energy is lost as the ball compresses upon impact with the bat.  On the other hand, the previously used aluminum and composite BESR bats bend much less due to their thin walls that flex slightly upon impact.  The ball, therefore, retains much of its pitched energy and contributes to the power of the bat speed.  Hence, none-wood bats hit balls faster with more power.

Both the NCAA and NFHS (National Federation of State High School  Associations) intended focus is to ensure that all bats have the same performance factors as those evident through the use of wooden bats. Players using the BBCOR bats would have to swing faster and more accurately to get the same results as before.

With nearly a five to six percent decrease in bat performance, advocates of the switch to the BBCOR bats claim that the game will be much more balanced among all players. Hitting teams will no longer have a slight advantage on the pitcher and his defense due to the substantial reduction in the new bats’ performance.  More importantly, slower speed batted balls will undoubtedly address some of the prominent safety concerns in today’s game of baseball.

In accordance with a statement made by the NFHS (National Federation of State High School Associations), it is claimed that the new bats will improve upon important aspects of the game.  “The new standard of ensures that performances by non-wood bats are more comparable to those of wood bats.  It’s also expected to minimize risk, improve play, and increase teaching opportunities.”

Here at BHS, the boy’s varsity baseball team already has five games under their belt, having played to a record of 2-3. The players themselves have been using the new BBCOR bats for some time now, with the majority of them having mixed feelings about the results seen from their service.  “I think some offenses have taken a pretty big hit”, says Matthew Gallagher (’12),  a current outfielder on the Varsity squad.  “You can tell that there have been some hits that would’ve gone for doubles or triples with the old bats, but instead ended up just being bloop hits or lazy fly balls.  It’s sometimes frustrating but you’ve got to adapt.”

Although offenses have seemingly taken a hit, other players have commended the new steps taken to maintain safety within the game of baseball. Fellow teammate Kevin Vaughn (’12) feels a lot more at ease knowing the safety has been enforced with the new line of BBCOR bats.  “It’s definitely a little relieving,” he jokes.  “As a pitcher, there’s always the threat of getting a hit with a line-drive comebacker.  I’ve had my fair share of close calls and it’s difficult to defend against a ball hit with such force off the bat at that distance.”

The overall outlook is that the new BBCOR bats will have a positive effect on baseball.  However, when negative sentiment towards the use of the bats will stop remains to be seen. Gallagher seems to have a view that seemingly sums up the dilemma at hand.  “I guess we’ll all just have to wait and see how things turn out in the future. Time will only tell.” 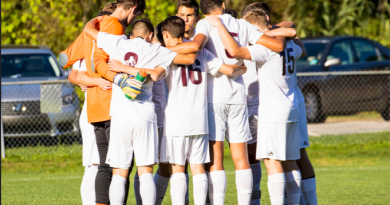 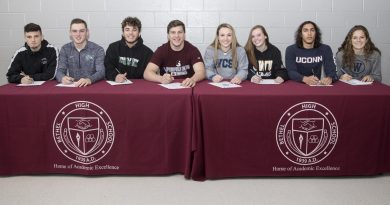