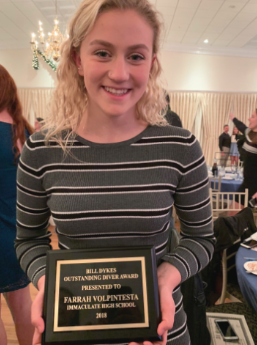 Farrah Volpintesta ‘20 has officially broken records across the board at Class L championships on Nov. 8, 2018 at Middletown High School. She is now known as the best female diver in the state of Connecticut.

Not only did Volpintesta surpass this but she shattered her own school record, with a score of 521.85 points on 11 dives.

Volpintesta dives on the combined team with both Bethel High School and Immaculate High School, the Wildstangs. Only starting competitive diving about a year and half ago, Farrah’s growth has been remarkable.

“It takes a lot of dedication, so you really need to love the sport as I do. To prepare for states, I have been practicing twice a day and sometimes before school starts,” Volpintesta explained.

All that practice has certainly paid off! Great job Farrah!