The annual sophomore Ring Dinner is fast approaching, scheduled to take place on March 23. However, the seemingly exciting event has taken a bit of a nasty turn; sophomores are fighting via Facebook, and vicious comments have been noted.

The Class of ’14 group on Facebook is intended to be an easy form of communication for sophomores to give information about events such as Ring Dinner. Recently, people began posting complaints about the Masquerade theme, like “I don’t really like the theme.” These comments quickly got blown out of proportion; names were called and sides were taken.

This heated argument began because people were dissatisfied with the Masquerade theme. Some sophomores bluntly expressed that they feel the theme is “childish” and “just stupid.”

Donnie Olson ’14 began calling himself “Dictator Don” on Facebook in an attempt to gather fellow sophomores to join his “side” against the Masquerade theme. When asked in person, Olson states that he “was pissed off. I was saying I’m a dictator, but it was funny. I was joking. People took it too seriously. I don’t regret it though.”

Sophomore Class President, Romana Pilipech ’14, states that people were “obnoxious and did not display tact in their dealings with each other. It was highly unnecessary.”

As time progresses, sophomores are beginning to simmer down on the matter. It is expected that all students will behave in a civil manner at the Ring Dinner event. The masquerade theme will likely have an option to wear a mask, and people can surely refrain from participating if they choose. 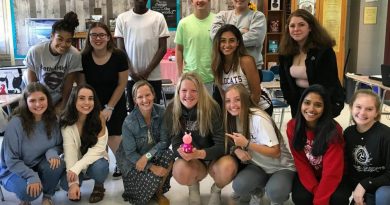