There is no doubt that the valedictorian and salutatorian of the class of 2015 are among the most accomplished in the history of Bethel High School. Both women have been heavily involved in extracurricular activities at BHS and have been accepted to ivy league institutions.

Representing the class of 2015 Madeline Kroot has earned the esteemed position of being valedictorian. Over her four years at Bethel High, Maddy has participated in Mirage, Model UN, PALS, NHS, the Geography Club, Field Hockey, and the World Language Honors Society. Maddy has also dedicated herself to furthering the community by taking an active role in Relay for Life each year. Maddy’s scholarship and writing talent have been recognized on a national level – her short story “Charcoal” won a silver medal in the 2015 Scholastic Art and Writing Awards. This fall Maddy will attend Dartmouth College to major in Geography. Maddy is a bright young woman who will bring her positive attitude and sense of humor to any situation that she is faced with in college.

Katie Griffin has worked extremely hard for four years to be named the salutatorian of this year’s graduating class. Katie will be going to Cornell next year, majoring in physics. She has performed in the many musical productions at BHS, including plays put on by the Onstage Players. Also, she has been a part of the Math Team and the Track Team. Her hard work, and kind spirit will get her far in college next year. 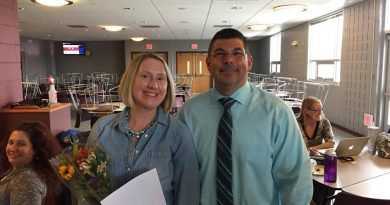 Spring Break Near and Far!