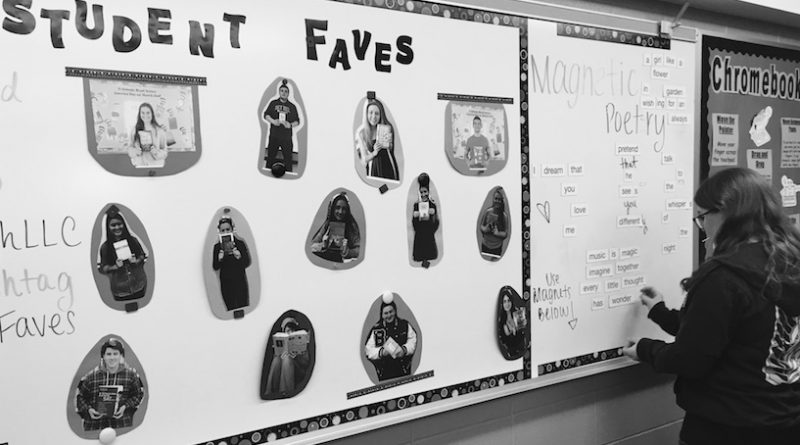 It is nearly impossible to go downtown without seeing the town library. It’s been there since anyone can remember; a pillar of the community, that remains despite the evolution of technology and the growing resignation to resources outside print. Thankfully, our school library is to us as the town library once was to the town; bustling, welcoming and vital.

Though, there is one way in which the school library sets itself entirely apart. In a resounding effort to, as Ms. Wismar says, “reflect the ever-changing needs of the community,” the Bethel High School library has transformed itself from a media center to a learning commons. The difference between the two can be put simply as a raised level of engagement. Where media centers display research and resources, a learning commons strives for an inviting, interactive and adaptive space.

A way in which the difference is most evident is the implementation of various themes and activities that change almost every month. From the revolving poetry stimulants, to the chess boards, to the coloring pages and puzzles, a student can be taken by the use of what is modernly called passive programming. This tactic, which is currently used in several  state and nationwide schools, is aimed at channeling opportunity and advancement via academic and creative appeal.

Despite the fact that the term “passive programming” sounds vaguely ominous, the idea is centered around establishing comfort–something that calls to everyone– whether it be the e-book recommendations or the do-it-yourself poetry exhibit.

Currently, the learning commons has in its rotation ten interns who work to maintain these numerous themes and aid the librarians in their upkeep of such a constantly developing setting. As a prime example of student opportunity, this small part of the student body has a say in the going-ons and indeed has handled their responsibility well. Students are currently asked to stop by the LLC to make an origami flower for the next spring themed bulletin board.

In the past, libraries have been rightly characterized as strict, stale and uninviting environments, filled with the musty scent of old books and curdling dust in the windows, the sound of a single finger to the lips an ever present echo. Since the necessary changes Ms. Wismar and Mrs. DeCarlo have provided, our learning commons is no longer recognizable in comparison to such a stereotype.

Even now, Ms. Wismar and her associates look towards the future to continue cultivating what they have grown so far. Instituting elective boards, which would feature classes that may appeal to lost or unknowingly intrigued students, is only one way being presently considered.

Indeed, it is safe to have faith in Ms. Wismar when she states that her sole mission and purpose for what might seem a trivial display to some, is only a conscious effort to “reflect the needs of the community as things are changing, especially as things continue to change.”

She is motivated by her students and if no other reason than her dedication, the perpetual malleability of the LLC is not such which should go unnoticed or ignored.